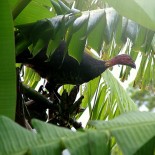 As i walked down the hill a big wind hit and i became fearful i’d be hit by a falling branch.  Just as i thought this thought a thump sounded beside me and i looked down and saw a young Pheasant Coucal  land at my feet.

I was not expecting to be nearly hit on the head by a falling bird. a branch maybe, a few leaves, but not a bird.

Coucals are not good flyers.  they fly like brown paper bags caught in a breeze. going up and crash landing in the long grass. a fast running aboriginal was able to run them down.

Young Coucals fly like a Macca’s box thrown out of a moving car window. It landed like a penguin that had been pushed out of a gumtree. It was not what it expected. It was not what i expected. an hour later it died. i was expecting a branch to hit me. Had i been expecting a Coucal i could have reached out, caught it and saved it’s life. Tomorrow as a walk down the hill i’ll be looking out for Coucals and …..get hit by a branch.